Yet another accidental series, this time of novellas!

This one is my husband’s fault. He was beta-reading my first book, The Secret Notebook of Sherlock Holmes, and he said of one of the stories: ‘You can’t just leave it like that, you have to write a story about what happens at the other end!’ And so A Jar of Thursday was born, followed a year or so later by Something Blue, and after another year by book 3, A Phoenix Rises.

A Jar of Thursday

When Jack Hargreaves takes a job with Fingers Molloy, it doesn’t quite go to plan. Fingers turns out to be a time-travelling burglar, with a host of ingenious devices supplied by the mysterious Mr Smith. And the things they’re stealing are, frankly, odd. But Jack is in no position to pick and choose — for Jack has a secret too…

Sherlock Holmes is convinced that Fingers Molloy works for his nemesis, Professor Moriarty. Yet Inspector Lestrade won’t take him seriously. How can the great detective prove he is right?

The further in Jack gets, the more serious — and mysterious — things seem. But breaking free and coming clean could land Jack in not just trouble, but danger… 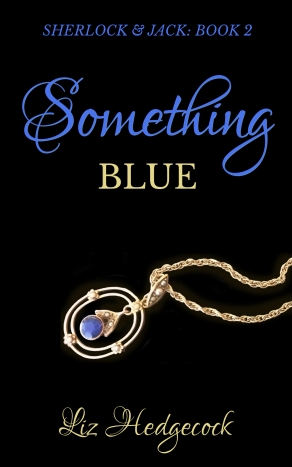 ‘I should have been the happiest woman in the world…’

When Jacky Day accepts Tom Huggins’s proposal of marriage, there is just one problem. Abandoned as a baby and raised in the workhouse, she has no family to call her own. Now, with her wedding weeks away, she enlists the help of Sherlock Holmes to try and find them.

However, the great detective has his own worries. His old enemy, Professor Moriarty, grows ever more daring, and his attempts to kill Holmes more blatant. Add Holmes’s imminent departure for the Continent, and finding Jacky’s family becomes a race against time.

Jacky is ready to embrace her future — but to do so she must confront her fear of returning to the workhouse she grew up in, and face the truth of her buried past…

Jacky Huggins only wants to cheer up the recently-bereaved Dr Watson. But when she accompanies him on a secret investigation into a kidnapping, she doesn’t expect to raise the dead.

Now Jacky is caught up in a cat-and-mouse game between an adversary who seems to hold all the cards and a detective who cannot come out of the shadows. And to make matters worse, Jacky is torn between her role as a wife and mother and the thrill of the chase…

Jacky longs to bring Sherlock Holmes back, but to do so she must find a way to help a man who won’t be helped — and risk her own reputation in the process.

How can Jacky reconcile friendship with family? And is it worth the risk?