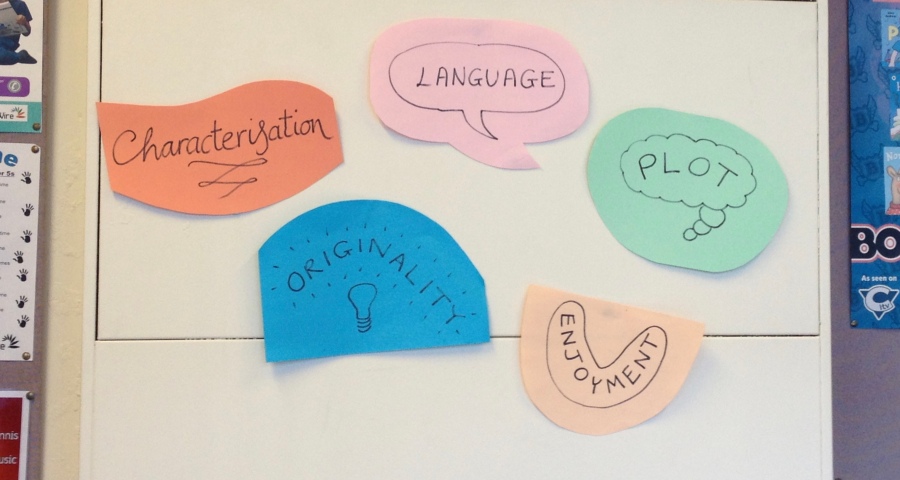 So this weekend I did something a bit different from usual. I ran a writing workshop!

It came about through a meeting of the Friends of Penketh Library (FOPL for short), who have been organising lots of events to support and promote the library. There’s recently been a big consultation about the future of Warrington’s libraries, with the possibility of closures, so using and promoting our libraries is really important. At the meeting we were talking about possible new events, and as the BBC Radio 2 500 Words story-writing competition was coming up, I asked if something related to that would be useful. A Facebook chat later, and an hour-long workshop for 10-13 year olds was booked!

It’s fair to say that I was slightly nervous. I’ve led writing group sessions before, but this was a bit different – I did a session plan and handouts and everything. Finding your name on the OUTSIDE of the building when you arrive is also quite disconcerting!

However, I needn’t have worried. We had a roomful of attendees, everyone who came was lovely, and there was lots of interaction. We talked about our favourite authors, looked at the judging criteria (see the featured image for my, cough, impressive artwork), shared some of last year’s 500 Words stories and discussed what made them so good, and finally got down to planning and beginning stories. Plans, storyboards, character sketches and stories began to appear, and by the end of the hour, everyone had something to take home and carry on with. Below is a bit of post-it feedback 🙂

Would I do it again? You betcha. And below is the story I wrote in the 15 minutes we had left after all the talking we did!

An Invasion of Ideas

A casual observer would not have noticed the pearl-grey cloud hovering over Penketh Library one Saturday morning in February. It was an unassuming cloud, an unobtrusive cloud. And yet it sank lower and lower, until parts of it began to slip down the chimney, and inch through the crack in the door. The rest of the cloud took advantage of a polite man in a hat, holding the door open for an approaching lady with a large basket, and slithered in thankfully.

The cloud of ideas regrouped in the foyer. ‘Where are they?’ quavered one.

‘I’m not at all sure about that,’ said the first voice.

‘Keep low and crawl on your elbows,’ said an adventurous idea.

‘What are you talking about? We don’t have elbows!’ But the ideas did as they were told, creeping past the librarian. Camouflaged by the bluish-grey carpet tiles, they sneaked through the children’s library to find a group of engrossed young writers.

‘We found them!’ cried a particularly exuberant idea.

‘Ssh! This is a library!’ hissed the others.

‘We get into their heads.’

The ideas rose into the air and circled the writers, looking for their match, their opportunity. Choose the wrong brain, and you could be cast aside, thrown out onto the Scrapheap of Bad Ideas. Choose the right one, and an idea could be transformed into a book – a film – a whole series of books!

‘All right everyone!’ whispered the Lead Idea. ‘We’re going in!’

The ideas spiralled down and flew into the young writers’ brains. Some looked as if they were listening for a noise they couldn’t quite hear; some gave no outward sign at all. But one by one little lightbulbs came on in their heads, and they began to scribble furiously.

The Lead Idea peeped out from her new home, where she was being transferred to paper by a pen so fast that sparks were flying off it. ‘Another successful mission,’ she thought, smiling to herself.

One thought on “My first writing workshop!”