I’m very happy to announce that, slightly earlier than anticipated, A Jar of Thursday is available to pre-order as an ebook on Amazon, and launches on Thursday 29 September!

What’s a jar of Thursday? Well, of course you’ll have to read the book to find out, but it’s a novella, a sequel to one of the stories from the Secret Notebook, which for ages was called ‘Fingers Molloy’ in my head. I was very relieved when it got a proper title at last!

It’s also my husband’s fault. I’d rewritten the ending of ‘Sherlock Holmes and the Burglar’  in response to beta feedback, and when he read the revised version his comment was ‘You can’t leave it like that, you’ve got to write another story about what happens when they come out at the other end!’

25,000 words later, here it is – and my beta readers have already asked if the characters will be reappearing! I’d call A Jar of Thursday a mystery with adventure and steampunk elements. Blurb and cover are below: 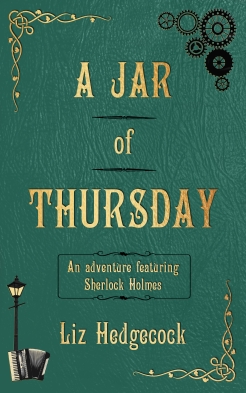 Can he do it again?

Jack Hargreaves’ latest job is not quite as expected. Jack’s new boss is Fingers Molloy, a time-travelling burglar with a host of ingenious devices supplied by the mysterious Mr Smith. And the things they’re stealing are, frankly, odd.

Sherlock Holmes is convinced that Fingers works for his nemesis, Professor Moriarty. Yet Inspector Lestrade won’t take him seriously. How can the great detective prove he is right?

This fast-moving novella, narrated by Jack and Dr Watson, features thrills, spills, showdowns, skulduggery, and a laboratory that thinks it’s a kitchen. Open A Jar Of Thursday to find out more!

How can I help?